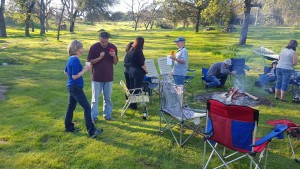 I never bought into the zeitgeist.  Since early childhood, I was just never cut out for that.  Crowd psychology of every ilk struck me (then as now) as being pathologically dumb, the aspirations of society being based on fundamentally false premises and besides, crowds can’t actually think at all.  My requirement for the culture of that time to accept my objective, non-subscriptionist thinking caused considerable strife in grade school, so I wound up seeking and being granted educational asylum nearby in Berkeley. I’d like to say that in Berkeley I was surrounded by free thinkers, but alas I was mostly surrounded by ideologues.  That their ideals happened to coincide with my own didn’t actually mean much.

By middle school, back in Castro Valley, my mindset and that of the local school district had passed each other entirely, going in opposite directions.  It was at this time that my folks and I turned to John and Joyce Livergood, champions of free thinking and alternative education, devout non-subscribers to the status quo, who ran an excellent school called Shady Grove.

It’s not easy for me to wrap my brain around the magnitude of what Shady Grove did for me, nor to convey it here.  Suffice to say that without that school, I may well have wound up surrounded by and hanging out with juvenile delinquents in continuation school, despite being neither truant in nature nor scholastically challenged.  Where my path would have led from there is anyone’s guess; it’s tenable to say that it wouldn’t have been good.

At Shady Grove (a tiny school of a couple of dozen fellow misfits, fully accredited despite being run out of a house), the criteria for my (or anyone) being accepted was based not on whether I was conforming to any set pathos, but on whether or not I happened to be making sense at the moment.  It was remarkable to me that I was neither feared nor ostracized for being “unlike”.  Hell, I hadn’t even found acceptance like that in Berkeley.

The school met every morning for a “General Meeting” and discussed everything from the day’s itinerary to the logistics of an upcoming trip (the school traveled and camped a lot), to politics, to environmental concerns, to personal issues among students and whatever else required a good run through the mill.  We were all encouraged to contribute and to discuss; encouraged to be objective, to scrutinize and to reason, discouraged from just accepting what we were being fed by any one source.  Polarized, idealogical thinking, the like of which we see so much these days, was frowned upon…issues and opinions were either supported or shot down based pretty much solely on their merits.  I flourished in the environment, scholastically and even (after awhile) socially.  For the first time in my life, really, I was accepted by a larger group than my immediate family and 3 or 4 very close friends.  Looking back on it, I realize how vital that was, and how formative to my “becoming”.

The school, alas, is no more; Joyce has left us and John is enjoying his accolades and legacy in retirement at a beautiful spread on the western slope of the Sierras (where I currently sit writing this as my contribution to the scrapbook for a reunion, currently underway and to which I have to get back presently).  I told John this morning that I wish he were still teaching; that society needs him.  He said “I actually taught for a bit at the local high school…until they found out about me.”  That was funny at the time and we all laughed, but it’s sad really.  We’re all so used to searing indictments of our educational system that we’re starting to accept it as being unchangeable, but don’t you believe it.  John changed it, for us at least, effectively saving many futures.  So it can be done, and I posit that it must, or game’s over for America.  But I digress.

My fellow Grovites here at the reunion (and elsewhere as well, one might speculate) have become a substantive lot, great company with whom to exchange ideas and discuss life, the universe and everything.  Our paths have been divergent, but not our mindsets.  Many have gone on to become teachers in their own right (myself among them), which makes me smile.  We’re older in body—and mind—but looking into the eyes of every one of us, I’m struck by how absolutely comfortable it makes me and I’m a bit surprised by how delighted I am to see the results of age and time.  John and Joyce nudged the rocks in our stream beds at the top of a great waterfall, changing the landscape below into something much more beautiful than it probably would otherwise have been.

I’ve missed these people over the decades, all of them.  Ideas are still supported or shot down according to their merits, nobody buying into the zeitgeist.  And I’ve missed that too.

I am, and will forever be, eternally grateful to John and Joyce for creating an environment where all these extraordinary things could take place.  May the ripples from Shady Grove grow outward through all of us and our teachings, perpetuating the encouragement of free thinking, scrutiny and reason.