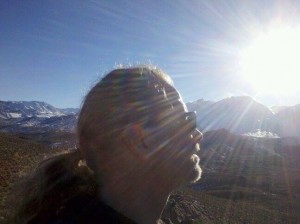 In the early 1980s, the highly-stratified hierarchy of Southern California guitarists was abruptly and violently flattened by a very humble, painstakingly polite, extremely sweet and soft-spoken British genius named Allan Holdsworth.  Despite his genuine belief that he sucked, he was on a level so far above the entire community of guitarists that our unanimous reaction was one of stunned horror, punctuated by the kind of nervous, unbelieving, crazy laughter one might adopt if one’s legs or fingers had been suddenly amputated, or if a planet-killing meteor had been discovered and we all knew that a swift death was immenent.  All of us, from the top echelon of famous studio gods down to lowly music students, now occupied one and the same strata.  It was surreal, it was wonderful, it was scary, and inspiring, and awful; it was blindingly brilliant, like staring at the sun, and we might as well laugh about it.

At no point was the effect he had on the scene in SoCal more powerfully driven home than after his first (now famous) show at the Roxy on Sunset.  Pretty much every noteworthy guitarist in LA was there—200 or so of the best cats in the world, several of whom had been on the covers of the guitar mags more than once—waiting to see what all the hubbub was about. I was there with my partner in fretmadness, Pebber Brown.

Allan began to play, and immediately all the air was sucked out of the room.  Nothing he did was in the slightest bit conventional, much of it wasn’t even remotely within the scope of what was considered possible; our disbelief couldn’t have been greater had he levitated off the stage, sprouted two extra heads and vomited fireballs.  And he was just getting started; he went on from there, with the effect of a physics professor from the 24th century transported back in time to teach a class in the dark ages.  By the end of the show, our collective game had been so effectively tossed out the window—glinting here and there as it tumbled down into the abyss in free fall, there to remain pathetically irrelevant for all time—that we were all brothers, where just 90 minutes prior, we had peopled all the various stations and elevations of musical society, from serf to royalty.  We were all unbathed beggars in His temple yard, now; we all knew it.  And we all knew that the world of guitar would never be the same.  At the end of the show, he left the stage and the lights came on—and that’s when it happened:

No one moved; no one said a word.  We all just sat there, pasted into our seats, blinking around at each other in total, stunned silence, for what probably was a solid minute.  Imagine it!  All the lauded hierarchy of the SoCal guitar talent pool, having been steamrolled into one level plane and staring silently at each other, as the stagehands coiled cables!  We were all brothers, now; the stratification was gone.  It remains to this day one of the most powerful moments I’ve witnessed in this life, in all my travels and experience.  At about the 30-second mark, a certain singer named Roth stood up to leave the room with his two supermodel escorts, as if to illustrate that too many elements of Hollywood are too predictable. The rest of us remained.  When movement and cognizance finally began returning to us, I went upstairs to the greenroom to congratulate him on ending so many brilliant careers.  He seemed a bit distraught and apologized for sucking so badly: “I just couldn’t play a thing.”  This was to become a pattern.

I had first met and befriended Allan just a few hours prior to that.  The explanation for how that happened is this:  He had been my biggest and most consuming guitaristic influence for years, though like almost every American guitarist, I had never seen him live. I knew that he was finally in town and would be playing the Roxy—had in fact been watching the date approach on the calendar for weeks—I lived about half an hour away, and knew when soundcheck was.  So when he pulled into the parking lot and went to get out of his station wagon, I was there in the poor guy’s face introducing myself, hand outstretched.  He was too polite to tell me to get lost, I attached myself to his ankle like a barnacle and we became friends.

I wound up hanging out with Allan a good bit back in the IOU days and while Road Games was being recorded.  I went over to his pad several times, he even came to a couple of my Orange County top40 gigs, which REALLY sucked—there he sat nursing his ever-present Coors, watching me suffer through that godawful 80s set-list nightmare, so fucking professionally embarrassed I could feel myself blushing onstage.  But at no time did he ever give me the slightest hint of elitism or one-upmanship; not even a friendly chiding about the nature of the gig.  He really didn’t seem to understand who and what he was, or what he had accomplished—and besides, even if he did, I think he’d rather die than be the slightest bit rude to any living being.

The memories I have from those times in Allan’s life are many, and paint a picture of a soul too good and too artistically pure for the turd-infested waters of Hollywood; an inhumanly talented god, cast as an underdog into the ring with the prince of darkness from Warner, but who nonetheless somehow won his way to freedom (THAT is a great story), and was able to resume his pursuit of The Impossible.  But the memory that really illustrates what a wonderful cat he is is that he offered to trade axes with me for a while.  He gave me a prototype White Charvel of his with a Jelutong body (which he had been playing at his recent shows, and which had been on the cover of Guitar Player—and which said axe began my love affair with Jelutong) and I gave him my 1960 Blonde L5 with the Florentine cutaway in return.

In depicting my Allanistic experiences, I would dishonor the truth if I didn’t mention that he has been a pivotal part of some very defining moments for me and my mental landscape, to wit:  When I was a young buck, barely old enough to get into bars and sufficiently lacking in life experience to believe that beating others at their game was what musical ability was all about, I was also dumb enough to believe that I hadn’t heard anyone do anything on the guitar that I would never be able to do, if I dedicated my life to doing that one thing, and for long enough (Such were the things that I thought mattered at the time).
Then I heard Allan, and I knew that no matter how hard and how long I tried, I would never be able to do that.  Any of it.  It would be like a dog chasing an airplane.  It was shattering to me, since up to that point I had entertained delusions of grandeur, the like of which are only possible in the chests of sufficiently young men, who are sufficiently full of their own bullshit.

Years went by, and as the post-Allanpocalypse guitar landscape in SoCal adjusted to the New Normal, I became ever more consumed by his brilliance.  Despite my having been educated as a composer / arranger / orchestrator of all styles and trained to have an abiding, open-minded love of good music from every century, decade, continent, culture and genre, nonetheless well over half the music I listened to was Allan.  I started becoming dimly aware that I was losing sense of my own identity as a musician; this could not end well.  It was about this time that the following occurred:

On the Road Games album, Allan’s entry into the solo on Tokyo Dreams (a blistering salvo I would never be able to play) somehow got confused by yours truly with mine very own licks, and I went to enter into a solo on a top 40 gig in a hotel lounge with said salvo.  I got exactly three and a half notes into it, realized what I had done, abruptly hung my arms at my sides, looked at the ceiling and had a good laugh as my rig fed back.  All good fun in the moment, as the businessmen and waitresses looked up from their martinis and scotch to see what had caused the Stratus Interruptus…but in the solitude of the drive home afterwards, I had to admit that a line had been crossed, and I had a serious talk with myself.  The upshot was that it was time for me to distance myself from Allan’s influence and rediscover who the hell Byron was.

Other than going over to his pad to visit a couple of times several years later, I got away from it.  It was a necessary move; I guess that at the time, his brilliance was too strong a drug for me to resist an untoward amount of influence.

A few years later, around 1990 or so, John Pena called me to his pad to do some guitar tracks for a project he was producing.  This was very humbling for me, given the company he keeps.  I asked him why he had called me instead of Luke or Landau.  He said, “You’re the best Byron Fry I know.”  This led to a longer conversation about musical identity, where it was finally—FINALLY—drilled through my thick effing skull that everyone brings something to the table that is uniquely all their own, and that the point of your musical journey is to find and nurture that voice and to become the best SELF that you can; who you truly, creatively, spiritually, musically, naturally and ultimately are.  I owe my buddy John a great debt of gratitude for that talking-to; it has set me free.

A couple of years ago, I went and saw Allan for the first time in over 20 years.  It was great to say hi and to be face-to-face with him after so long, if only for a few minutes in the crowded hubbub of the Baked Potato; it’s not like I hadn’t missed my old friend.  Then I sat there with my fiance, listening to him play and staring into that old, dark, familiar forest, that mental and emotional wilderness I had had such a cathartic time clawing my way out of…feeling the unlikely mixture of the coldness of an ancient battlefield and the warm, unabashed adulation of something impossibly beautiful, knowing that he is so much better than I, or anyone, could ever be.  But unlike in my 20s, or in my 30s, now that I’m in my 50s, I was able to smile about it on the drive home, knowing that I’m the best Byron Fry there is, and feeling that on a good day, that’s good enough.