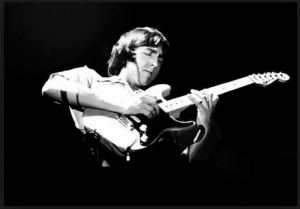 NOTE:
In order to be in the right context and to glean my meaning
in this piece, please first read

Allan has left us.

I don’t know why—maybe that’s a fool’s question—but it’s hitting me hard, it hurts like hell and it feels a bit surreal.  It feels like some cosmic crime has been committed; like there’s an indignity here that has to be answered for.  It’s a very real desecration of intense human beauty, and I feel…offended.

It has taken me several days to be able to write, as I felt myself cycle through denial, shock, a sort of numbness for a couple of days, then grief and some tears, then finally today what may be the beginning of acceptance.  As John Steinbeck said of his brilliant close friend Doc Rickets, upon his untimely death:  “He burned a deep scar.”  The quote fits on many levels.

I revered Allan, his vision and his work to a degree that grew so large, it started to change my inner landscape; I had to cut bait and flee to rediscover and nurture my own musical identity.  But I left some things unsaid, and I can’t hit “rewind” to get it right next time.  And that’s always gonna hurt.

Allan was many things to me: A friend, the greatest musical hero I’ve ever had, the greatest musical genius I’ve ever known, one of my biggest influences and a de facto pioneer.  His was the light showing us all how tight, narrow and confining are the corridors of convention.  He joins Igor Stravinsky, Miles and Michael Brecker in being one of the four musicians I admire most, though Allan was more of an influence on me than perhaps all the others combined.

As much as anything else, though, Allan was and remains to me an enigma:  How does one think so differently?  I have wondered for decades what his processes were and what goes on inside that head; how it’s possible for one person to be so acutely inventive and so much faster, clearer and concise in his thoughts and execution; why he was so clear-minded and unerring in his innate distrust of convention.  There is only one other person whose ideas made me wonder thus, and that was Albert Einstein.

But whereas I never knew Einstein, I did know Allan, and knowing him didn’t make the wiring of his brain any less of a mystery.  Hanging out and talking, eating, drinking or playing, he was always off-handedly dropping casual perspectives and premises that dispelled long-held beliefs on almost any subject, like a breeze blowing away the fog and exposing a better way forward.  He wasn’t about to accept status quo without scrutiny, and almost always had improvements to offer up to the world, whether regarding guitar design, capturing the real magic of music during production, brewing beer, or any other area of living that crossed his “mind’s chaotic lumber room”.  And he sometimes couldn’t stop his fingers from crawling around a table or counter as he spoke; I think he garnered some playing tricks from his pet tarantula.  He was nothing if not wired differently, and better, than us.

His was a high-octane, high-performance, supercharged intellect with lots of horsepower; he couldn’t help it.  Maybe he was just born that way, who knows, I can’t explain it.  Maybe some sort of cerebral genetic mutation was involved.  I don’t believe in the physical possibility of aliens from other worlds among us, simply because of the distances involved and radiation during travel, but I’ve often regarded Allan as being as good a reason as any for someone to entertain the notion, were they so inclined.  I watched him sit down at a Space Invaders video game—which he had never seen—at a restaurant-bar I was playing in Orange County, and set the high score with one quarter.  He was just that way.  Never have I known anyone who was so radiantly brilliant and capable.

I’m talking about his brain and abilities a lot here, but as magnificent as his intellect and skill was, to me the gentleness of his spirit was just as striking.  You can hear the beauty and unspoken exuberance of the man’s heart in his playing; if you knew him, you know that he would neither insult nor criticize anyone, nor degrade anyone’s efforts, though all paled next to him when measured by any yardstick.  He was famously humble, an attribute as rare among performing artists as it is a thing of beauty, and—we can hope—a progenitor of like behavior in others.

If there was one fault I might find with Allan and justify giving a voice here, it is that he took humility too far.  Back in the IOU days, he apologized to me in the green room after his first show at The Roxy had destroyed the hopes of every guitarist in the room—and that room had held pretty much the entire guitar talent pool of the music industry.  He looked dismayed, like he was a failure. “I’m so sorry.  I just couldn’t play a thing”, he said.  I pointed out that he had probably just ended hundreds of careers, but he wasn’t having it.

Allan never got his due share of recognition, not from the public and not even from most rank-and-file musicians.  He was too far up in the thin air, too far beyond human ability, for most musicians to grasp what he accomplished.  And he was far too pure, and too real, to garner the understanding and appreciation of a music industry that runs strictly within the confines of its shallow, sophomoric, pedantic, money-driven paradigm.  He was too beautiful and true to his art for such a cesspool of banality and posers.

Nor did he care; I don’t think he had much of a choice but to follow his road the way he did, despite being well aware of the costs and rewards.  I believe that his path followed the only choice his constitution would allow.  He lived his life and made his music with brutal honestly and unyielding commitment to expression, which is far more than I can say for myself.  In short, he put his money where his mouth was; he walked the walk.  Here am I, a comparative coward, having largely misspent my decades thus far compromising ideals in pursuit of mediocrity, trying to placate a pop Zeit that embraces a level of over-simplification I find nauseating.  And to what end?  Paying the rent?  When I’m crossing the finish line and looking back over my life, I’m not gonna be pleased that I wasted so much of my precious time here on Earth failing to answer my calling in the best way that I could.  As Leonard Cohen brilliantly intoned, “It’s hard to hold the hand of anyone who is reaching for the sky just to surrender.”

I should’ve written twenty symphonies by now, not one.

Anyway…so here am I, still alive with all my ragged ugliness, and he and his beauty have been taken away.  This has me reassessing my road and wanting to live my life more honestly, lest I risk more spiritual oblivion in the creative void.  I need to create more beauty, less ugliness.  More truth, less bullshit.  Besides owing that to myself, to those around me and to world, I feel like I owe it to Allan…as do we all owe him such a great deal.

Allan, good sir, you showed me a better way to do many, many things and gave me more inspiration than perhaps any other single musician.  Your absence hurts like hell and to say that your voice and perspectives will be missed is an understatement.

So I will just say thank you.  And good night.