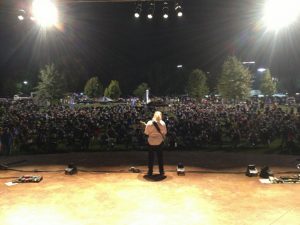 I move to center stage on cue. The follow-spot reflects off of my Strat’s hardware, shooting beams of light over expectant faces, as the crowd falls silent.  There’s a hush of “…Well?”

Every generation contributes some performances that remain in the collective conscience, glistening above the waves of fading history like blazing gemstones, accenting the shadowy hallways of the human journey.  The Beatles on Ed Sullivan; Jimi at Monterey and at Woodstock; Jaco at Montreaux; the riot-enducing premier of Rites of Spring in Paris, 1917.   I seriously doubt I’ll ever make a contribution so important that it will ring down through the halls of history, but so be it.  Any performer worth his or her salt knows that the mission is to die trying.

Some say that being on stage alone in front of several thousand people is the loneliest thing a soul can experience.  To me, it just feels exposed, the loneliest times being when I’m surrounded by people whose ignorance, hatred and bigotry I find alienating. But screw loneliness…I really don’t know much about it anyhow, since I tend to avoid the company of people whose mindset is toxic for my soul.  And as Ed Abby said, there’s a big difference between loneliness and solitude…and I’ve always enjoyed solitude.

Absorbed in the technical moment-to-moment, I glance at my pedals and the settings on my axe, adjust a thing or two, look out at the expectant crowd, clear my head and prepare to launch off into the unknown…

This is the part of the show I get to go off-script and express myself in a natural, spontaneous way; the little moment of musical authenticity for me on this tour. It’s the water my thirsty soul craves.  I never know what I’m about to do, but I always take an honest run at it and it either flies or fails in direct proportion to how sincere my love is, and how disciplined my craft.  I’ll get what I deserve, no more no less.  But will the audience?  We’re about go exploring together, up into the thin air, where we’ll find out…

I unexpectedly lock eyes with a small child in one of the front rows and the sudden shift to my context is jarring…time stands still and breathless as I blink, suddenly yanked out of my thoughts and into the moment…she’s such an effective reminder of why I’m here, I may as well have been slapped in the face.  I realize my mouth is hanging ajar.  I close it.  I smile and wink at the child, who smiles and hides her head in her Mom’s bosom.  And I let it hit me: what I do is sort of amazing.

That is to say, my job is to amaze.  And that’s amazing.  I sometimes lose track of that.  I can remember some pivotal concerts I saw when I was young, which filled me with The Awe and The Wonder; I can remember keenly the passion I felt while listening and bearing witness to the practitioners of The Craft in their moments of greatness, and the limitless possibility I saw for myself.  The future was lifting Her cosmic skirt and beckoning; we were going to be the greatest love in history, Music and I.  Had someone told the young, aspiring me that I would someday be struggling with “burnout”, I’d have laughed long and hard.  Yet struggle I have, lo these many years.

And I’m not alone.  Starting about 20 years ago, the digital revolution took down the record industry and attrition radiated outward into nearly every other area of musical endeavor, creating buyer’s markets and removing them from the ‘viable’ list.  We now see the unlikely spectacle of experienced, storied (spelled: old) musicians touring exhaustively every year, instead of working in the studios and collecting royalties; cynicism and burnout syndrome must be growing issues among those ranks.  As long as people will pay actual money for actual performance, we will have safe harbor on The Road—the last viable refuge for those making their living with music—and once somebody figures out how to replace live players with holograms or pretty enough robots, that’ll be that.  But The Road is a harsh mistress, and as is the case with anything that’s too unrelenting, burnout is a very real thing.

The trick—no, the imperative—is not to let Music the Art become Music the Job…sort of like the way that aging gracefully is a matter of seeing how much of life’s shit you can take in the teeth and keep smiling.  It’s difficult to avoid the burnout mindset; we all know mule-in-a-rut musicians who show up, plod through their gig and go home.  I get it, I understand it, I spent several of my best years buying into that misguided pathos; rent must be paid, after all.  But if you take gigs playing music you don’t like, then music will become to you what sex is probably like to a hooker.  And that is far, far too dear a price to pay.

And it isn’t like the workplace environment doesn’t encourage cynicism, given the circus-like spectacles that have come to be expected of musical performance these days, our ranks consequently swelling with posers, over-blown computer jockeys and the myriad of over-the-top, talent-free sensationalists.  How does the actual voice of music—the fragile, soft-spoken, nuanced connection between artist and art—survive in such an alienating, roiling cesspool of non-dynamics, shouting-loud volume and visual diversion?  This is to say nothing of yapping bandleaders, clubowners and other workplace insect authorities, most of whom seem to think that the way to get the most out of performers is to badger them with obvious minutiae or to dazzle them with displays of clinical psychoses.  And don’t even get me started about lighting directors and the fog machines with which they assail our health and degrade our performance.  You kids get offa my lawn.

If you’re a player, you know that of which I speak. The causes are real, they’re digging under your skin all the time and it’s hard to tune out the irritating rash they give you.
But guess what?  From the crowd’s perspective, exactly NONE of that exists; NONE of it.  They cared enough to leave the comfort of their home—some driving for hours, through bad weather—just to honor you with their presence, and that’s as real as human love and support gets.  It ain’t about you, the performer.  It’s about them, those expectant souls in the seats, having schlepped all the way out to your show, in hopes of being amazed; in hopes of having their lives brightened and having something to talk about on Monday morning.
The good news is that musical authenticity and crowd pleasing are not mutually exclusive.  It’s up to the performer to make both happen.  As a humble servant to Music, my job is to be true to Her and to do Her bidding.  She didn’t put me on Her path in order to make me rich; this is a high honor.  And while a performer’s emotional baggage surrounding career and craft is categorically out of place here on stage, the dichotomy is that the baggage is a large part of what makes us who we musically are.  We have to be able to draw from it without letting it dampen the delivery.  It requires mental, emotional and spiritual duality, but I find that when my head is in the right place, I can lose myself, my ego, the baggage…I tune out the bandleader and become the blank canvas…and then, I can usually hear what wants to be.  And on those fleetingly rare occasions when I can block out the chatter and my love is pure…if my discipline is worthy of the craft…if I can play it true and sincere…then it’ll get traction and it’ll mean something.

Sincerity is the elusive thing for me; chalk it up to too many years in the Hollywood studio scene.  I try to please others too much and it winds up not really connecting.  For quite some time, I couldn’t figure out why it’s the most self-absorbed, uncompromising and self-endulgent things I’ve done that have gotten the best response.  Then I realized:  Sincerity.  When my performance is sincere and I say what I mean, then all of us—the audience, the musicians, the crew and maybe even the lighting director—leave with a pleasant glow in our spirits.

I play an idea; I hear it echoing off the back walls during the pause afterwards. “Once upon a time…”
I build on the idea, trying somehow to appease the laws of musical composition and thematic development, while at the same time appeasing the necessities of theatrical presentation.  Toward the end, pushing the idea towards its hole in the clouds, the audience and I ride a surging, bucking probability into the final intensity and I catch the child’s eye again.  This time, she doesn’t hide in her Mom’s bosom.  She smiles openly, right at me.  And I know I’ve won the day.