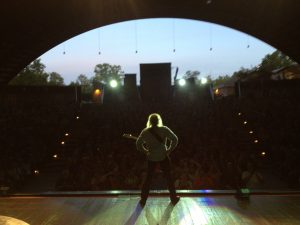 What is it that makes artists recoil from compliments? I’m talking about ‘true’ artists here—people who take Art seriously, who live their lives in subordinate servitude to Art; not those who are in it specifically for recognition, admiration or success. We of The Craft have a name for that latter type: Posers. And this article ain’t about them.

For true servants of The Craft, recognition and approval can de-legitimize Art; this is possibly a by-product of our disdain for critics and the foaming, vapid pop culture whose frenzy they stoke…as if our contribution has no value if the ignorami like our stuff. Mustn’t get that association on us; it’s a mark of disgrace and might not wash off.

But if that’s the case, then what about compliments coming from quarters we regard as artistically legitimate? From people we admire, mentors, or fellow artists whose work we venerate? I occasionally receive a true compliment from someone who necessarily gets it—who understands The Process, who I know to have walked in my shoes—and even then, my knee-jerk response is to hurry past it, to turn my face away lest I get forced into accepting the kudos, or worse yet, facing the possibility that I may have actually, finally, done something good and right. Like many of us, I’ve been deeply ingrained with the sense that accepting compliments, even inwardly—especially inwardly—is bad form. Those of you who live in the artistic culture know that of which I speak. We are painstakingly conditioned to believe that accepting compliments is toxic, and most of us take that conditioning to heart. To accept compliments jokingly is okay—“oh please, no no no (gimme more, gimme more…)”—but not seriously. That might lead to self-approval, which of course fosters incompetence and ends it all; an horrible, dishonorable death.

Is it that we have to hold ourselves to such high standards in order to be competent with The Craft that acknowledging anything we’ve done right might encourage complacency, threatening the sacred skill we bring to the table? Is our skill set that fragile?

Well, yes. Of course it is.

And I think that what might be at the root of this is the very real necessity to keep ego out of the way in order to hear (or see) what wants to be. Ego is not a bad thing, in the right ratio and context; it is the healthy, normal sense of self and a vital part of how we survive. It drives us to become who and what we are. Without it, no human can ‘become’. The human engine simply won’t run without ego.

But in the artistic process, there’s a very ticklish balance to be had between being the egoless blank canvass—removing self from the equation entirely—so that we can be Her stylus, neither filtering nor discoloring what She wants, while at the same time we must be in command of our Skill to the degree required to render Her wishes, which of course requires self and ego, in order for our skill set to be there at the table.

And I think most of us agree that the artistic process requires a person who operates from a place of humility. Deep-down humility, the kind that makes us feel like we can never be good enough, never practice enough, never be truly blank enough to really hear (or see) EXACTLY what wants to be, so that we can bring it into the world with the excellence of form that She deserves from us. We’re all different, us artists, in how we create our Art, but for most of us it’s a very fragile process. And this means that recognition, compliments and success are as much a threat to our Art and well-being as a rattlesnake in a baby’s crib.

Then there’s the oh-so-exacting criteria by which we must be approved by our peers and fellow practitioners of The Craft. If we’re seen practicing bad Art, or chasing admiration with our Art, it’s blasphemy. Worshiping a false prophet. Our reputation is ruined, as it should be. We must walk in that corridor of trueness that will win the respect and admiration of just the right people, just the right circles. A compliment for the wrong thing, or from the wrong quarters, is like a billboard advertising our disgrace. We must not only walk the line of being true to Her and bringing purity of process to The Craft; we must also be perceived by our peers as walking that line. To achieve success is to bring one’s self under scrutiny, as it’s a very suspicious thing.

There are, of course, those among who achieve huge success in the eyes of pop culture and true artists alike; who can—if they’re capable of it—accept compliments without dishonor, because they haven’t sullied their Art and their love for Her in achieving that success. But statistically speaking, they are vanishingly rare.

What do you think?